Defending Kohima: the sacrifice of Captain John Young at Kharasom 1944 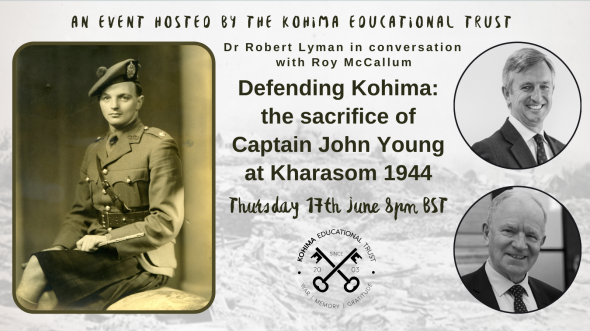 Defending Kohima - the sacrifice of Captain John Young at Kharasom 1944

Following on from our recent talk "Valour at Kohima" this event is another story of the utmost bravery, though it is less well-known than the history of the VCs.

Our trustee, historian Dr Robert Lyman in conversation with Roy McCallum.  They discuss the bravery of Captain John M Young of the Argyll and Sutherland Highlanders attached The Assam Regiment who, age 24, in World War II at Kharasom near Kohima, gave his life in a heroic stand to protect India from invasion having first saved the lives of the brave men he led.

Our guest speaker Roy is a businessman based in Glasgow, Scotland. Originally from Ayrshire, he came across the story of Captain John "Jock" Young when researching his own father's military service in Burma during World War II.  Jock Young's heroic action was, until recently, one of the forgotten stories of the Battle of Kohima.

Roy brought this unrecognised story of bravery to the attention of the local council and was instrumental in ensuring that Captain Young was suitably remembered and honoured by the city of Glasgow. In 2011 a granite plaque was unveiled outside Captain Young's former home in Glasgow's West End.

For those who would like to see the unveiling of the plaque which took place in 2012 - here it is on YouTube. With many thanks to John Young's family for reminding us of this recording:

DONATE NOW +
Shortlist announced for Gordon Graham Prize for Naga Literature 2021
The shortlist has been announced for the Gordon Graham Prize for Naga Literature 2021
Learn more
DONATE NOW +
KET runs in the London Marathon October 2021
We are delighted that we have 3 runners from 2nd Signal Regiment who are running on behalf of KET in…
Learn more
DONATE NOW +
Among the Headhunters: The story of a Naga village - online event
Dr Robert Lyman in discussion with Robert and Sylvia May recounting the story of the Naga village of…
Learn more
We need your help. Donate today.